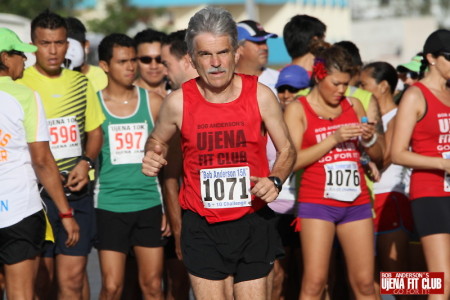 "A Long Run" is a full-length documentary movie narrated by Sean Austin.  It will be released December 2013.  The story follows Bob Anderson, founder of Runner's World, as he celebrates 50 years of running by racing 50 races in 2012.  His goal is to average under 7 minutes per mile for at least 350 miles.  "The challenge itself is not that amazing.  However, to race 5k to the half marathon each weekend at an average pace of under 7 minutes per mile makes it more of a challenge.  Equally challenging is that 64-year-old Bob Anderson works full time as the CEO and chief photographer of the Ujena Swimwear Company he founded in 1984," says director Michael Anderson.

"We have already faced some tough challenges in the first weeks of this venture.  Two weeks before the start, I tripped on a run and it took over 60 stitches by a plastic surgeon to sew me up.  The scar above my right eye will never let me forget that moment," says Bob Anderson.  "But actually from a running stand point my beat up knee caused the most problems.  I could not totally bend it fully for weeks."

"Bob's first race of fifty was New Years Day just two weeks after the fall.  He could not hardly bend his leg but he knew that he needed to complete race number one.  A 5k race put on by the DSE Club in San Francisco.  I have never seen Bob start out so slowly.  He was dragging his leg," says Catherine Cross, Bob's wife and co-producer of the movie.

The focus of the film is on Bob and his journey but it is also about runners he knows or well meet along the way.  "Our goal is to make a running film that will inspire you to get out the door.  Inspire you to be a better runner.  Inspire you to get others out on the road.  If you start lacing up your running shoes after watching our film, then we produced the film we wanted," says director Michael Anderson, Bob's son and runner.

For additional information go to: http://www.alongrun.com

Bikini...weapon of choice. Hundreds of bikini models from all over the world were interviewed and photographed. Each had their own reason why the bikini is their weapon of choice...

We discovered in making this film the power of the bikini. We traced the history of the bikini and along the way uncovered why this provacative piece of clothing has been raising eyebrows for nearly sixty years.

"Pure entertainment from start to finish. Finally a film that gives us inside information on why the bikini is so magical," Dan Pulcrano (Metro Newspapers) stated.

We wanted to find out about this exciting world. A world very few know much about. We followed models and photographers for three years. What we found out will surprise you. How far will they go to get the perfect shot?

Most girls don't just wake up, slip into a bikini and come alive in front of a camera. Models do all sorts of things to look great in a bikini. Photographers use all types of techniques to capture the perfect photo. We uncovered their secrets of success.

Our camera crews followed 100 models and photographers in their quests to capture the perfect images. We filmed behind the scenes action on a location shoot in the Dominican Republic. We found out exactly what happens at a bikini contest including backstage.

The real Bikini Model world is more exciting than we thought! BIKINI MODEL the movie takes you inside this world. "This film is the first entertaining documentary ever made about bikini models," stated director Bob Anderson.

Somewhere In Venezuela is about a young girl who works in a sewing factory but dreams of becoming a swimwear designer. The factory owner's son falls in love with her despite his mother's disapproval. A tragic event forces the girl to flee Costa Rica and no one can find her. Will she survive the challenges that awaits her? Her simple life will never be the same again...

Drama, 94 minutes, Color, English, Not rated. Directed by Bob Anderson
(Completed June, 2002 Note: If rated it would be most likely PG.)

"I loved it. The story is so unique. I can't believe this was Esther's first major role," said Dan Pulcrano, publisher Metro Newspapers.

What About Cuba! is the story of a young Cuban girl chasing her dream of becoming an Internataionly known fashion model. Danielle lived a simple life in Havana working in a cigar factory. She believes that modeling will take her all over the world, buy her anything she wants and fill the void in her life. Danielle is forced to make some difficult decisions. Filmed entirely on location in Havana Cuba. Original music by Cuba Cafe Express.

Drama, Not Rated, Color, 100 minutes, English, Directed by Bob Anderson
Completed June, 2001 Note: If rated it would be most likely PG-13 for language.)

"I have never seen a movie that has captured the raw feel of Cuba so well. Danielle performance was so convicing. And I just loved Cory Duval," stated Linda Takegi.